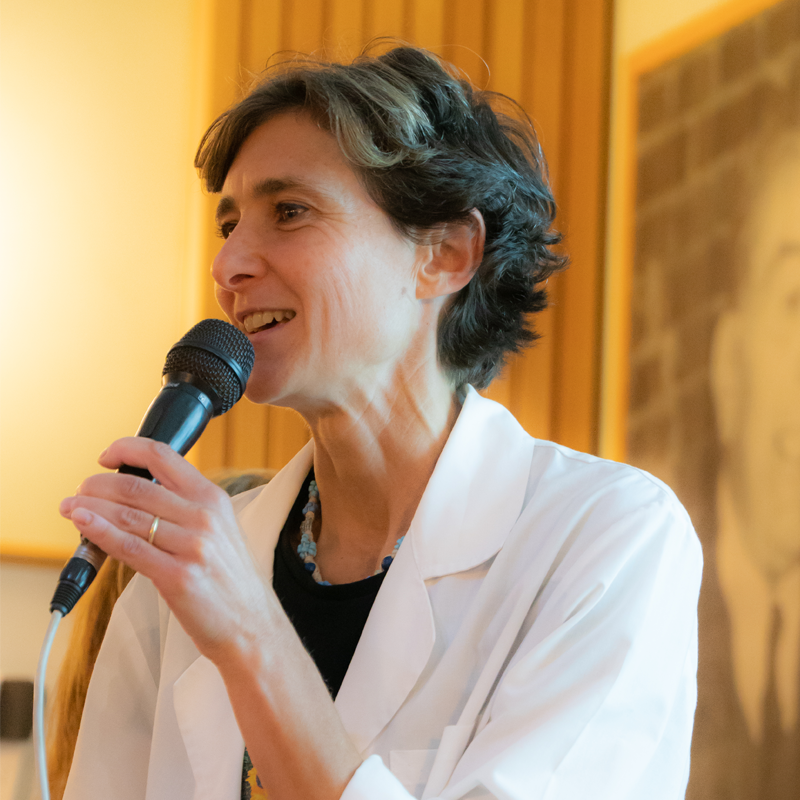 Dr Giovanna Chiorino is an Italian scientist involved in genomics research (the structure, function, evolution, mapping, and editing of all genes of an organism). Among others, her team focuses on studying DNA regions which were believed, until recently, to have no role, but which actually make the difference between humans and other species!

With a broad background in mathematics applied to biology and specific training and expertise in cancer genomics, she is head of a laboratory involved in the analysis of how genes do the things they are programmed to do to keep a body working (gene expression). Her research is specifically focused on prostate cancer, but she is also interested in other cancer pathologies such as melanoma, breast cancer, head and neck squamous carcinoma, cholangiocarcinoma and ovarian cancer.

Her team is multidisciplinary, with biologists and biotechnologists interacting with mathematicians and bioinformaticians and uses high throughput technologies. When the first results on genome sequencing became available, she focused on the activity of coding genes, the elements of DNA that are committed to produce proteins. In the following years scientists realized that these represent only the 2% of the entire genome, and that the remaining 98% (known as “junk DNA”) is actually critical to human health! By analyzing these “non-coding genes” we can find ways to detect cancer early and to predict how a tumor may respond to therapy.

In this brief interview Dr Chiorino describes her research activity on cancer genomics, how genomics is important for the CANCERPREV project and what motivates her to be part of this consortium.

This website uses cookies to improve your experience while you navigate through the website. Out of these cookies, the cookies that are categorized as necessary are stored on your browser as they are essential for the working of basic functionalities of the website. We also use third-party cookies that help us analyze and understand how you use this website. These cookies will be stored in your browser only with your consent. You also have the option to opt-out of these cookies. But opting out of some of these cookies may have an effect on your browsing experience.
Necessary Always Enabled
Necessary cookies are absolutely essential for the website to function properly. This category only includes cookies that ensures basic functionalities and security features of the website. These cookies do not store any personal information.
Non-necessary
Any cookies that may not be particularly necessary for the website to function and is used specifically to collect user personal data via analytics, ads, other embedded contents are termed as non-necessary cookies. It is mandatory to procure user consent prior to running these cookies on your website.
SAVE & ACCEPT